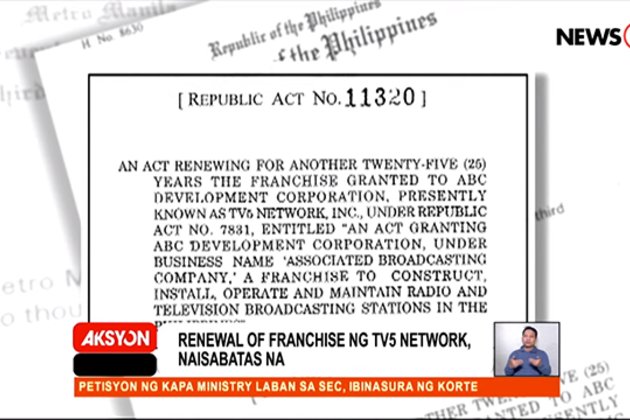 THE BILLS renewing the broadcast franchises of the Catholic Bishops' Conference of the Philippines (CBCP) and TV5 network for another 25 years have lapsed into law.

Without acting on the two measures, President Rodrigo Duterte allowed the two measures to lapse on April 22. A president can either sign a law, veto it partially or entirely, or not act on it until it lapses into law. Under the Constitution, any bill that is neither signed nor vetoed by the president will automatically lapse into law 30 days after it was forwarded by Congress.

Both TV5 Network (RA 11320) and CBCP (RA 11319) are allowed to continue to "construct, install, operate, and maintain radio and television broadcasting stations in the Philippines."

TV5 primarily broadcasts sports and news programs, through ESPN and News5. Its franchise was first granted in December 1994 under RA 7831. The CBCP, for its part, operates radio stations across the country through its Catholic Media Network (CMN) arm.

The franchise of media giant ABS-CBN Corp. is also expiring next year. The president has previously expressed his opposition to the renewal of ABS-CBN's franchise for its supposedly "biased" reporting and for supposedly not airing his political advertisements as 2016 presidential candidate when his campaign team had paid for them. House Bill 3439, seeking to renew its franchise is still pending approval at the committee level in Congress.