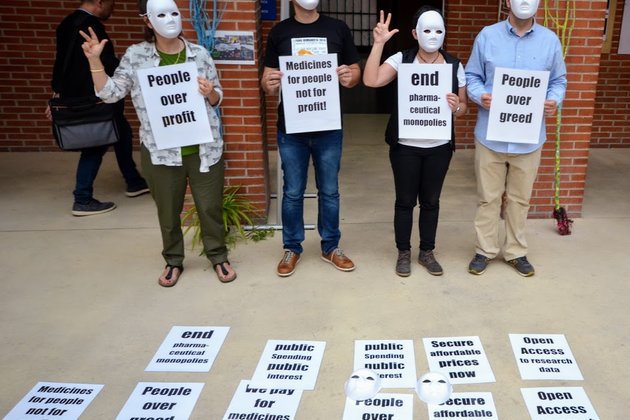 We're between two historical epochs now: BC and AC - Before COVID-19 and After COVID-19. Established institutions, entrenched regimes and powerful corporations are well-positioned to navigate the uncharted waters of this in-between, "DC," or "During COVID-19" time. Less equipped are the poor and working class, unable to gather safely, to protest, to rally for better conditions. The novel coronavirus has amplified the gross inequality that dominates our society. Just look at the disconnect between the stock market and the plight of workers. It seems with every announcement of historic job losses, the Dow Jones and the S&P 500 shoot upward. On Wall Street, they're counting gains, while on Main Street, they're digging graves.

"These are hard times," Rev. William Barber II said Wednesday, appearing on the Democracy Now! news hour. "A lot of the pain is by choice. It didn't have to be. It's not because of the virus, per se. It is because of the pandemic of greed and lies and trickle-down economics that caused us to move in the wrong direction from the beginning."

Reverend Barber went on, "Even before COVID hit, too many people in power were too comfortable with other people's deaths. We have 140 million poor and low-income people in this country, 43% of the nation, 700 people dying a day from poverty and low wealth, two-and-a-quarter million a year and 80 million people either uninsured or underinsured before COVID hit."

Barber is co-chair of the Poor People's Campaign and president of the non-profit Repairers of the Breach. He and Campaign co-chair Reverend Liz Theoharis of the Union Theological Seminary are calling on people from all walks of life to join a digital, online Mass Poor People's Assembly & Moral March on Washington on June 20th at June2020.org. "Don't you believe these lies these governors are telling us about the time to open back up," Barber implored. "Stay at home. Stay alive. Organize. Organize."

Despite the incredible challenges, despite the demands to stay at home (for those fortunate enough to have a home), people are organizing and taking creative and courageous action. As has been the case throughout U.S. history, movements drive change. Now is no exception.

Shortly after his interview on Democracy Now!, Barber spoke at a virtual mass action, a nationwide strike staged by workers at McDonalds restaurants. Fast food workers there and at other restaurant chains have been organizing the "Fight for $15" campaign for a living wage for years. One worker after another spoke on the live video stream, detailing the challenges and risks they face daily as part of our sprawling, underpaid and virtually ignored essential workforce:

"I'm a McDonalds worker here in Kansas City, Missouri," Fred Marion said. "I'm going on strike because, as you see me and you hear me, I am a human just like you. I may not be a doctor or a paramedic, but I'm out here on the front lines just like them, and I'm human just like them. We deserve PPE, hazard pay, healthcare, and $15 per hour - it's just a living wage." Angelica Hernandez spoke in Spanish, inspired to strike by her co-worker who was stricken by COVID-19 and is currently on a ventilator. McDonalds, she said, showed no interest in providing protective gear for workers. Katerra Wilkins added, "We're risking our lives for $7.25 per hour."

In solidarity with striking workers were speakers like Mary Kay Henry, International President of SEIU, the Service Employees International Union and epidemiologist David Michaels, who served as head of the Occupational Safety and Health Administration under President Obama. New York Democratic Senator Kirsten Gillibrand spoke, pointing out that "even after Congress passed an emergency paid sick leave law in March, 75% of workers were left out, thanks to carve-outs for big businesses like McDonalds...Making sure everyone can afford to stay home when they are at their most contagious is crucial to combatting this virus."

Meanwhile, in front of McDonalds' corporate headquarters in Chicago, activists installed a symbolic picket line of sign-holding, cardboard silhouettes of striking workers. The ACLU drove an electronic billboard truck through the streets of downtown Chicago, broadcasting the workers' demand for a living wage.

These are difficult, dangerous times. Armed, overwhelmingly white, rightwing vigilantes storm state capitals, while the undocumented, the poor, communities of color - those most at risk, keep our economy moving - growing our food, working in slaughterhouses and warehouses, delivering packages and meals, cleaning our hospitals and caring for our elderly - they face COVID-19 infection on a daily basis, with practically no safety net. Whatever future we collectively forge in the "After COVID-19" era, the needs of these essential workers and of the poor must be front and center.

We're between two historical epochs now: BC and AC - Before COVID-19 and After COVID-19. Established institutions, entrenched regimes and ...