Why dont people like Joe Biden Let me count the ways 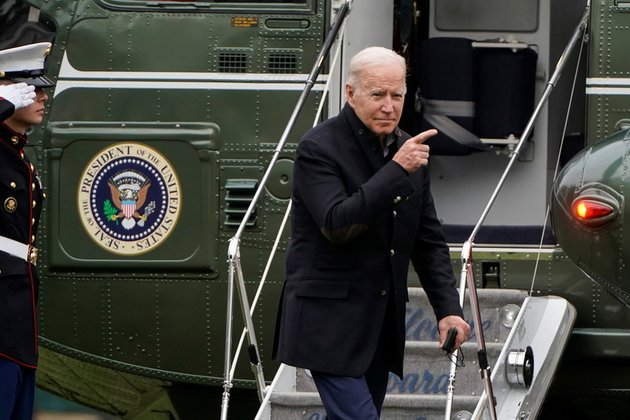 Bored with kicking around Covid-19 like the political football it has become, the chattering class has taken on a new cause: why do so many people dislike the US president?

It would take several encyclopedia-size volumes to fully answer that question, but let's try to be brief. Anointed by Barack Obama himself last year despite an abysmal primary performance, Biden slunk into the Democrats' prime position, with election results preposterously showing him to be the most popular president in history, despite a clear indication that he had been elected not for his virtues but for his opponent's failings.

And Biden wouldn't be doing any of the governing, it was clear. When all the non-Biden candidates suddenly dropped their candidacy to endorse him, it became obvious that the former president had made a few calls on behalf of his ex-VP, declaring that the past-his-prime gaffe-machine was to be the party's unlikely, doddering, weirdly racist savior. Under the guise of United-Colors-of-Benetton-style diversity-in-name-only, the nation would project the image of progress while the hoary old system continued cranking away beneath the surface.

Why put Biden in such a position when there were younger, more surface-diverse and coherent candidates up for grabs? For one reason: it would make taking out the president look like a singularly disastrous proposition for anyone plotting a palace coup - anyone who didn't want the profoundly undesirable Kamala Harris as president, at least. Harris, second only to Biden in her unpopularity, would be safely neutralized in her runner-up position, and the status quo would be safely in the hands of the system pulling Biden's strings when the economy started to collapse for real.

That system would have license to pick whoever it pleased to throw under the bus when the collapse took place, with no beloved demagogue in situ to urge the people to rise up against their hideously corrupt leaders; no individual with a cult-like following to demand pitchforks and torches be taken to BlackRock's headquarters or its CEO's home; not even a rising movement to convince the masses to turn off their TVs, throw them out the window, and watch Covid-19 and the threat of vaccine mandates dwindle into a tiny little blip in the corner of their minds.

Biden, too, would have dwindled into such a speck, his existence so inconsequential despite his decades in Congress that one would have to truly scan a room three or four times to pick out the hair-transplanted, confused-looking old man who seems like he'd be more at home playing bingo with his fellow care home residents than slugging it out on the political stage. This is why, of course, the man appears to take no unscripted questions and seems to spiral into rage when he's confronted with a question that he hasn't been briefed on yet.

For the same reason Trump's 2020 campaign came off as curiously lackluster, a carefully choreographed death spiral for the inveterate showman, Biden's party did not want the responsibility of the demise of the American empire in its hands. The near-extinct Tyrannosaurus Rex of the petrodollar system comes closer every day to collapsing, and whichever party is in office at the time will literally and figuratively be left holding the bag, spelling its doom in no uncertain terms. One can wriggle out of a sex scandal or an embezzlement oopsie, but one can't rid oneself of the stench of collapsing the global financial system. Even George W. Bush didn't try that one, splitting the responsibility between his own outgoing bailout and the incoming Obama, spiced up with a lot of misplaced 'hope' propaganda. Americans were fed so much 'hope' they didn't know which way was up by the time they'd lost their houses, and could no longer figure out who was to blame.

Biden has thus found himself caught between a rock and a hard place, assuming - as some wonder - he knows he's there at all. Just 36% of Americans approve of his performance, while 53% disapprove, according to Quinnipiac University's survey last week, his worst performance so far - and there's plenty of distance yet to fall. The stock market continues to soar even as real-life incomes continue to implode, and Main Street is having it rubbed ferociously in its face that there is no real relationship between the stock market and ordinary people. It's a tough lesson, but Americans had to learn it at some point.

The question now is will anyone take that lesson and do anything with it, or merely moan on social media and go back to sleep?

The progressive wing of the Democratic Party is seething, having been told to "vote blue no matter who" in 2020 with the reassurance they'd at least get a few scraps thrown their way, and maybe a trail of breadcrumbs leading them out of the forest of Trumpitude into some mythological liberal paradise. Instead, they have received nothing but one slap in the face after another as their neocon-at-heart president (the man who co-wrote the Patriot Act, as we all seem to forget) struggles to railroad arch-scumbag Neera Tanden and her dance partner from hell, Rahm Emanuel, through a very accommodating Senate. Those who voted for him in hope of a return to some nonexistent 'normalcy' are getting the 'I told you so' treatment from their friends on the left and big innocent puppy eyes from their pals on the right.

And Biden, for all the promises that he would stay the course after four years of supposedly disastrous Trump leadership, has merely checked out and let the carnage continue. Doddering towards his ninth decade, he seems to barely know where he is half the time, nor do half the rest of Congress, most of whom could apply for senior citizen discounts at their local Applebee's.

No wonder Americans don't relate to him. The only question is why they aren't doing something more about this government by the short-termers, for the short-termers? The comatose response to outrage after outrage resembles nothing so much as the checked-out trauma liberals experienced in the wake of Obama's elections, believing this was it - the end of the never-ending War on Terror - only to be served up several more heaping helpings of the stuff. 'It'll only be a few more years' becomes the never-ending refrain, but that's no good for the young and middle-aged who have to suffer through these short-termers' disastrous policy decisions.

Biden's real problems may start with image - it's hard to believe in a politician who doesn't appear to be in full control of his faculties - but while Republicans rallied around Reagan during his similar demise, Democrats have quietly begun to distance themselves from Biden, meaning there's more at play than mere dementia.

His presidency has the added embarrassment of him having been sold to America as the man who would 'fix' the country. The narrative managers claimed we had begged for just this candidate and by golly, we were going to get him. We may never know the truth of what happened with all the many voting shenanigans that happened last November, but the notion that Biden won more votes than anyone in US history is a pathetic joke that Our Democracy™ will never live down. Had they not added that particular insult to injury, the Biden crew might have made a safe getaway, but it was one kick too many to a population truly weary of being kicked.

Former US Labor Secretary Robert Reich whined in the Guardian last week, sounding legitimately confused if not personally wounded by so many ungrateful Americans disliking Biden, and demanding to know what more the administration can possibly do. Look at the stock market! It's yuuuge! But it takes a Trump-size personality to sell such Trump-sized BS, and Biden doesn't have it in him.

Lowering our expectations even lower than they already are - to sub-austerity levels after several presidents in a row took an axe to the economy and encouraged their cronies to fill their pockets as fast as possible - is not a governing strategy. The government must quit allowing BlackRock and its ilk to loot the treasury, ban insider trading by Congress, investment banks, and private equity, and start returning the money to the people. It's that or let Americans dig up the truth for ourselves - and we won't be very happy with what we find.