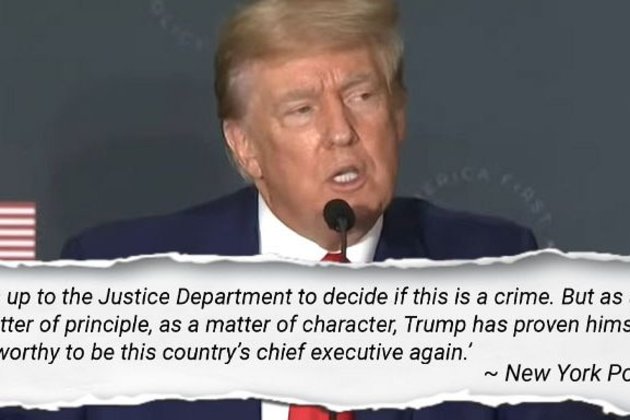 Powerful media owner Rupert Murdoch is no longer supporting Donald Trump as the next president of the USA, as Alan Austin reports.

ON AMERICAN prime-time cable television last Friday, Fox News confirmed that Rupert Murdoch has switched his support for the next US president from Donald Trump to Ron DeSantis.

Laura Ingraham, one of Trump's most fanatically loyal spruikers since he launched his campaign for the top American job in 2015, introduced her guest:

The weight of this was not just Ingraham's breathless endorsement. Nor was it DeSantis beaming back with incredulous joy. The significance was that right at that moment, Donald Trump was speaking at a major rally in Arizona which Fox was completely ignoring. That would have been unthinkable just a month ago.

Donald Trump has been a blight on American history

Donald Trump has been the worst President in the history of the United States.

Murdoch and Trump since 2015

Many observers believe Rupert Murdoch made Donald J Trump President. Fox News's uncritical adoration of the former TV host and failed businessman and its malicious coverage of his opponent, Hillary Clinton, ensured millions of voters were duped on a range of issues. But it goes much deeper than that.

Trump made many senior White House appointments on the basis of the fealty shown to him on Fox News.

Ambassadors plucked from Fox include those sent to New Zealand, Germany and Poland. Business Insider has listed 21 Fox people who went to work for Trump.

Trump, the pandemic and the News Corp misinformation machine

Recent events in the U.S., Australia and the UK have heightened the urgency of the community campaign to reduce the influence of News Corp's misreporting.

'Unworthy to be chief executive again'

The first sign of Murdoch's shift came just over a week ago, on 22 July, after damning evidence had been aired by the Select Committee in Washington investigating the 6 January 2021 insurrection.

Australians must be wary of Trump's 'big lie' infiltrating our politics

He was smacked down immediately by strident fellow-panellist Jessica Tarlov:

Did the decision come from Rupert Murdoch himself?

We know from parliamentary hearings in Australia that Murdoch seldom instructs his editors directly, but makes sure they know his thinking.

Media correspondent for National Public Radio, David Folkenflik, believes the damning NYP and WSJ editorials could not have been written "without Murdoch's assent or direction":

One year on from 6 January, another 'coup' looms

The attempted coup of 6 January does not spell the end of the threats to America's democracy, writes Phillip Farrugio.

Will this make a difference?

For decades, Rupert Murdoch has been credited with deciding governments in Britain, Australia and the United States.

Australia's May Election suggests his power may still be significant, but no longer decisive.

All seven Murdoch capital city daily newspapers campaigned vigorously in their mendacious "news" reporting for a return of the Morrison Government. Six of them openly endorsed the Coalition the day before the Election.

In regions where News Corp prints the only newspapers - Queensland, Tasmania and the Northern Territory - support was higher for the Coalition than elsewhere. Coalition support collapsed in Perth where the daily newspaper is not owned by Murdoch.

The Republican Party will select its next presidential nominee at its National Convention in August 2024 in Milwaukee, Wisconsin.

Many things will change before then. The Justice Department confirmed last Wednesday that criminal investigations into Trump are underway. These could land Trump in gaol. Although even that would not dampen the ardour of many of his supporters.

Alan Austin is an Independent Australia columnist and freelance journalist. You can follow him on Twitter @alanaustin001.

With the defeat of Scott Morrison, Australia has dodged the abyss of Trumpism.