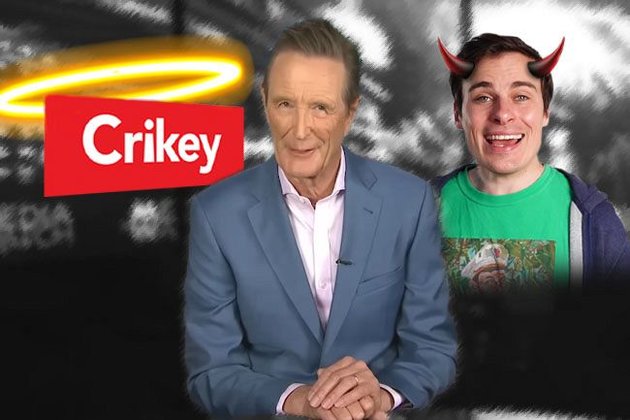 Despite its claims of being small and independent, Crikey uses its cronies in the mainstream media, including ABC Media Watch, to promote itself and its funding campaigns and attack its competitors. Another eye-opening expose by Dave Donovan and Michelle Pini.

AUSTRALIAN news website Crikey, which you have probably never heard of before, recently launched a successful crowdfunding campaign to fund its defence of a defamation lawsuit.

GoFundMe says it has raised $493,000 so far (at time of writing), although that does not take into account the new paid subscribers this fully paywalled website attracted from the campaign.

On the other hand, it also doesn't factor in the expense Crikey took in taking out full and quarter-page ads in the New York Times.

Clearly, the crowdfunding team had a six-figure budget, yet felt free to market Crikey as a "small, independent website", a "minnow", and in other such incy wincy style terminology.

However, Crikey is owned by billionaire and millionaire media tycoons, influential media insiders, and affluent identities. It is small, perhaps, but only in the sense that it is not very well known, respected, or read.

You might think a publication with that sort of backing and those sorts of connections wouldn't need to reach out to ordinary Australians for cash. We discuss this issue in previous articles HERE and HERE, where you can also get a more detailed understanding of the big money and the insiders behind Crikey.

The truth about Crikey's crowdfunding campaign

This article is about how one of Crikey's major media insider shareholders, who hosts a program on Australia's public broadcaster called Media Watch, used his position to promote Crikey's deceptive crowdfunding campaign. Promoting Crikey, despite previously utterly discrediting other truly independent journalists engaged in crowdfunding campaigns. It will also discuss other links between Media Watch and Crikey.

Indeed, all the way through, Barry framed the fight in terms of a "small website" up against a raging behemoth, all the while strongly implying "freedom of speech" was on righteous Crikey's side against the "hate[d] Murdoch media".

Nowhere did Barry mention that Crikey is backed by media tycoon billionaire JB Fairfax - a fierce dynastic competitor to the Murdochs. Nor did Barry choose to note that Irish-Australian media tycoon Cameron O'Reilly, who made much of his fortune selling his newspaper business to the Murdochs, also holds a large stake in Crikey.

Some way into his segment, tacked onto yet another statement about how tiny Crikey is, Barry did, briefly, just in passing, gloss over his glaring conflict of interest:

Oxford-educated expatriate Englishman Paul Barry did indeed work at that "small website". He was a senior reporter and an associate editor at Crikey from December 2010 until June 2013, when he became the host of Media Watch.

As for Paul Barry's "very small shareholding" in Crikey - well, small does seem to be a term thrown around a lot by Crikey and its cronies. According to Fairfax Media, in June 2012, Paul Barry was given around $152,000 worth of shares in Crikey's parent company, Private Media. Accounting for inflation, this would be the best part of $200,000 in today's money.

More about the Crikey crowdfunding con

The deeper you dig into Crikey's crowdfunding for their defamation case against Lachlan Murdoch, the muddier it becomes.

Compared to Lachlan Murdoch and JB Fairfax, that may appear small, but to ordinary Australians? To the average everyday person and to this, in fact, impecunious, independent small news website, it is a huge amount. It is also significant enough for Barry to be listed in the ASIC's Current & Historical Company Extract as a key shareholder in Private Media.

Then again, Paul Barry may not necessarily identify with the common folk if this 2014 quote in a Murdoch tabloid is accurate:

All of which give a somewhat different perspective to Barry's rousing promotion of Crikey's crowdfunding campaign at the end of the Media Watch segment:

Of course, if Crikey is a "winner", so is Paul Barry.

Another weird twist in this story is that Crikey hasn't always been so in favour of small, independent publishers crowdfunding their legal defences against entrenched interests.

In fact, Crikey conducted a brutal character assassination on popular Youtuber, comedian, and investigative journalist Jordan Shanks when he reached out to his fans for help. Jordan, more commonly known as Friendlyjordies, was being sued by former NSW Deputy Premier John Barilaro for defamation, so he asked fans to help fund his legal defence. Allegedly, Barilaro famously even sent the NSW Police Fixated Person's Unit around to Shanks' producer Kristo Langker's house, arresting him, terrifying his mother, and almost killing his dog.

Shanks did some excellent work exposing Barilaro, who has since dropped his lawsuit against Friendlyjordies and resigned under a cloud. But rather than standing up for Shanks, Crikey followed the mainstream media line by mocking and deriding him.

In a remarkably unhinged Crikey article by former News Corp editor Tory Shepherd, Shanks was even compared with the likes of Pauline Hanson and Donald Trump:

The Crikey article simply dismissed Shanks' criticisms of the mainstream media, including the ABC, out of hand:

When Paul Barry's Media Watch came to report on Shanks in 2021, they spent most of the episode implying he was a racist for some of his Italian-themed Barilaro skits. Not mentioned by Barry, was the fact Jordan's full name is Jordan Shanks-Markovina and, like Barilaro, he is the son of Mediterranean immigrants.

When it came to crowdfunding, Barry predictably referenced that "small website", Crikey, who had reported Shanks' crowdfunding as little more than a moneymaking scheme:

Sound familiar? If you can't beat 'em, join 'em, appears to be Crikey's new mantra something Barry also chose to "overlook" in his recent Crikey segment.

But it is the difference in tone and context that is most glaring, which you can see in a recent video by Friendlyjordies, where the two segments are compared.

Jordan needs to be boundy b the rules or pay the price but not Crikey - clearly.

It is worth considering how much more Jordan Shanks may have made in his crowdfunding campaign if Paul Barry's Media Watch had decided to give it a plug rather than a raspberry.

Independent Australia is Crikey's main competitor when it comes to "small Australian news websites". Although we don't have any big backers at all, we employ five journalists to their 11 and our web traffic is comparable.

But Media Watch has never mentioned us in our 12 years of operation apart from once, to disparage one of our contributors. It ignored our crowdfunding efforts when we raised what Barry would call a minuscule $50,000 to investigate the (former Speaker of the House) Peter Slipper scandal, as well as the book we produced on the matter.

It ignored our long investigation into Kathy Jackson, who is now in Federal prison, largely due to our efforts.

And when it came to our hard-won scoop on Barnaby Joyce and then staffer Vicki Campion, Mediawatch followed the mainstream again, lauding a journalist (and coincidentally close friend of Campion) who reported the matter no less than three months after us - safely after the 2018 Federal Election.

When we complained to the ABC about the matter, Media Watch producer Jason Whittaker dismissed us with contempt:

We also confirmed our sources, through investigations editor Ross Jones, but Whittaker implicitly disparaged Independent Australia as a 'tweeting/gossiping/blogging/reporting' operation and not to be trusted. As we said at the time, a paparazzi photograph from an adjacent roof of an unidentified woman with an apparent baby bump crossing the road is not really proof of paternity.

The whole response was nothing short of insulting.

Who is Jason Whittaker? The former editor of Crikey, of course, who took up his role at Media Watch in 2017, less than one month after leaving Private Media.

It is difficult to imagine Whittaker issuing such a highhanded slapdown to his former work colleagues at Crikey.

It's not what you know, it's who you know when it comes to Australia's media. If you aren't an insider, you can please yourself.

As you may have read, Independent Australia is struggling financially. If you value our truly independent, fearless journalism please consider supporting us with a subscription HERE or a donation HERE. Thank you for your support.