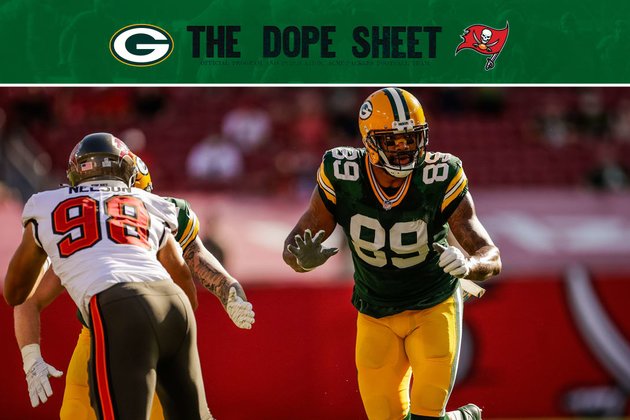 The Green Bay Packers go back on the road to take on the Tampa Bay Buccaneers this Sunday.

It is a matchup of the top two teams in the NFC since 2020. Green Bay has a 27-8 regular-season record (.771) over that span with Tampa Bay checking in at No. 2 with a 26-9 mark (.743).Green Bay and Tampa Bay first played in 1977 and the Packers hold a 32-22-1 (.591) edge in the regular-season series while the postseason series sits even at 1-1.The Packers and Buccaneers are facing off for the third time since 2020 (two regular season, one postseason).It is Green Bay's second visit to Tampa in three seasons (Week 6, 2020).The Packers have won three of the last four regular-season matchups.Only two of the last seven contests between the two teams have been decided by a touchdown or less.The winning team has scored 20-plus points in each of the last seven games (including postseason) and 30-plus points in five of those contests.On the road, the Packers are 13-15-1 against the Buccaneers with the teams splitting the last two contests. Tampa Bay won in 2020 and Green Bay won in 2014.This will be just the fifth time Green Bay has played at Tampa Bay in September (1984, 1992, 1996, 2008) with the Packers' only victory coming in 1996.

FOX Sports, now in its 29th season as an NFL network television partner, will broadcast the game.

Play-by-play man Kevin Burkhardt joins analyst Greg Olsen and sideline reporters Erin Andrews and Tom Rinaldi.DIRECTV subscribers can watch the game with NFL Sunday Ticket on Channel 717.Compass Media Networks will be broadcasting on radio to a national audience with Chris Carrino (play-by-play) and Brian Baldinger (analyst) on the call and Jeff Biggs hosting pregame, halftime and postgame shows.All Packers games can be heard on the Packers Radio Network, which is made up of 49 stations in Wisconsin, Michigan, Minnesota, Illinois and South Dakota. This year, the Packers transitioned to a new flagship station in Milwaukee, iHeartRadio Milwaukee's 97.3 The Game WRNW. For a full listing of radio affiliates, go to packers.com/video/radio-network. Wayne Larrivee (play-by-play) and two-time Packers Pro Bowler Larry McCarren (analyst) call the action. McCarren first joined the team's broadcasts in 1995 and enters his 28th season calling Packers games. After originally being paired together in 1999, McCarren and Larrivee enter their 24th season of broadcasts together. They surpassed Jim Irwin and Max McGee for the most regular-season and postseason games broadcast for the Packers with 313 at the 2018 season opener against Chicago.The Packer radio broadcast is also available via subscription on Sirius Satellite Radio or NFL Plus (nfl.com/plus).

THE DOPE ON THIS WEEK'S OPPONENT

In his 14th season in the NFL, having previously served as an offensive coordinator for two seasons (L.A. Rams, 2017; Tennessee, 2018), a quarterbacks coach for six seasons (Washington, 2010-13; Atlanta, 2015-16), and an offensive assistant for two seasons (Houston, 2008-09).In his first three seasons leading the Packers, he has authored one of the greatest starts to a head-coaching career in NFL history. With a 13-4 record in 2021, he led the Packers to a third straight NFC North crown while also earning the No. 1 seed in the NFC for the second consecutive season.Became the first coach in NFL history to post 13-plus wins in three straight seasons and his 39 wins from 2019-21 passed George Seifert (38) for the most wins by an NFL head coach in his first three seasons in the league (Elias Sports Bureau). His 39 wins are also tied for the second most by a coach over any three-season span in league history, trailing only Mike Ditka's 40 wins with the Chicago Bears from 1985-87 (Elias).Has guided the Packers to a 22-2 record (.917) in the regular season at Lambeau Field, the top home mark in the NFL from 2019-21 and the best home winning percentage by a Packers head coach in his first three seasons.In his first season leading the Packers in 2019, became the first coach in club history to lead the team to the playoffs in his debut season. Also led the largest one-year win improvement in team history (plus-seven wins).

Promoted to head coach following three seasons as Tampa Bay's defensive coordinator.From 2019-2021, Tampa Bay ranked third in the league in takeaways (82) and third in sacks (142), joining the Pittsburgh Steelers as the only teams to place in the top five of both categories. In addition to the sacks and takeaways under his guidance as defensive coordinator, the Buccaneers ranked first in rushing yards allowed per game (82.5), first in rushing yards per attempt (3.72), first in QB hits (352), first in defensive fumble recoveries (37), first in passes defensed (241), second in strip sacks (26), third in tackles for a loss (262) and fourth in forced fumbles (52).In 2021, led a defense that finished first in the NFL in QB hits (123), third in rush defense (92.5 ypg), fifth in fewest points per game allowed (20.8), tied for fifth in takeaways (29) and was seventh in sacks (47.0).In Tampa Bay's championship season in 2020, directed a defense that led the NFL in QB hits (142), tackles for a loss (107) and takeaways (34), while tying for the league lead (including playoffs) in sacks (58.0).Joined the Buccaneers after spending four seasons as head coach of the N.Y. Jets (2015-18). Was also the Miami Dolphins' interim head coach for the final three games of the 2011 season.

Sunday will be the 58th overall meeting between these former NFC Central rivals (including postseason). They launched the series in 1977 when the expansion Buccaneers moved to the Packers' division after an inaugural 1976 campaign in the AFC West.From the second meeting in 1992 through the first meeting in 1998, the Packers won 12 of 13 contests with the Bucs' lone win in that stretch coming in overtime (Dec. 10, 1995).The largest margin of victory in the series came on Oct. 2, 1983, when Green Bay defeated Tampa Bay, 55-14.

PARIS, France: Throughout northern and western Europe, vegetable producers are considering not planting crops due to the financial effects of ...