Ways to Watch and Listen in the UK: 49ers vs. Broncos Week 3 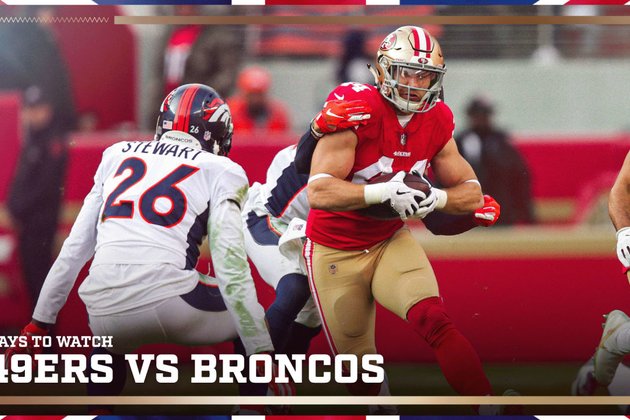 The San Francisco 49ers travel to Empower Field at Mile High to face the Denver Broncos at 1:20 am BST on Monday, September 26. Here are all the ways to follow the game.

HOW TO WATCHTV Broadcast

Sky Sports: Kickoff for 49ers vs. Broncos on "Sunday Night Football" is on Monday morning at 1:20 am BST. The game will air on Sky Sports Main Event and Sky Sports NFL. For more information on watching the NFL on Sky Sports, click here.

TalkSPORT 2: 49ers games will be broadcast in the United Kingdom via the TalkSPORT radio network. Monday morning's game against the Broncos will be aired on TalkSPORT 2 where fans will hear the call by the 49ers radio broadcast team of Greg Papa and NFL veteran Tim Ryan.

Live Blog: Fans can follow the game via the 49ers live blog for in-game updates, highlights, stats and analysis during the team's Week 3 matchup against the Denver Broncos. Be apart of the action by chatting on the live blog to share your live reactions, interact with fans across the world and get your questions about the game answered by 49ers digital media coordinator Briana McDonald.

Away: Games where the 49ers are on the road to play at the opposing team's stadium.

Bye: In the NFL, each team has a scheduled week in or near to the middle of the season where they do not play a game. The week is referred to as a Bye week. This season, the 49ers Bye is in Week 9.

Division: Each conference is broken down into 4 divisions: East, North, South and West. Each division has 4 teams, who play each other twice a year. The 49ers are in the NFC West along with the Arizona Cardinals, Los Angeles Rams and Seattle Seahawks.

Stay connected with the 49ers by following along on each of the team's social media channels: