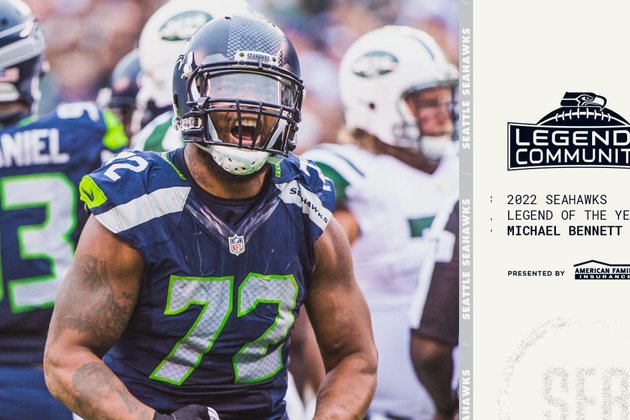 Former Pro-Bowl defensive end Michael Bennett was named Seahawks Legend of the Year prior to Sunday’s game against the Atlanta Falcons.John Boyle

Michael Bennett, one of the most disruptive pass-rushers and unique personalities in Seahawks history, has continued to make a difference in the years since his playing career ended.

And on Sunday prior to the Seahawks' Week 3 game against the Atlanta Falcons, Bennett was named the 2022 Seahawks Legend of the Year.

"It means everything," Bennett said of the honor. "That's what being an athlete is about, our impact as human beings. Any time you're recognized by an organization that you hold so dear to your heart, and a city that helped you grow up as a man, it's special. I just shows what we should be trying to do as athletes."

"It a big honor, especially with the guys who have come before me like Cliff and Doug," he said. "When we as athletes can contribute to humanity, that's an important thing."

Both during his playing career and in the years since he retired, Bennett has been an outspoken activist fighting for social justice, and through the Bennett Foundation he and his wife, Pele, founded in 2014, Bennett has helped improve the health and wellbeing of youth and their families in Seattle, Bennett's hometown of Houston, and Pele's hometown-and their current home-of Honolulu.

This year, Bennett, along with Baldwin and Avril, started the Champion of Change celebrity basketball game that raised money for local charitable organization. Bennett also dabbled in broadcasting this year, serving as an analyst on the KING 5 broadcast of preseason games.

"Oh man, it was such a great time," Bennett said of joining former teammate Mike Robinson on the pregame broadcast. "It was just really a unique opportunity to talk and to express ourselves, and to give fans a look at how we would talk in the locker room, but also give people insight into how players feel."

Bennett is currently studying architecture at the University of Hawaii with the goal of pursuing community planning and using design to dismantle systemic injustices.

As last year's Legend of the Year Award winner, Baldwin penned a letter to Bennett to congratulate him on the honor:

I know Jethro's not your middle name, but it feels fitting in this moment anyways...

Black Santa, man, it's crazy how time flies. It feels like yesterday, and almost simultaneously 10 years ago that we were sitting here together. Since then, we've built families and put down roots, and now I look around at all that's passed, and I feel grateful.

Don't get me wrong, I'd go back to seeing you ride that police bike around the field in a heartbeat, and jumping offsides on defense every down, but watching our lives fill up outside of football has been its own joy.

When I think about a guy who's done right by his community, I've always thought of you. I think it's just part of your DNA. And partnering on Champions of Change this year reminded me of that, even though I don't recommend a basketball commentating career in your future.

You inspire me Mike, and you make me so proud to call you a teammate and a brother. As last year's Legend of the Year, it's an honor to present you with the 2022 Legend of the year Award and welcome you into another brotherhood. I love, man, and I'm proud of you, and I'm looking forward to many more years of working in the community with you. I love you.