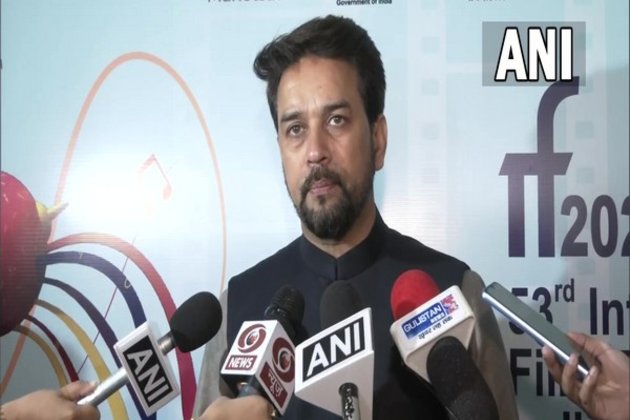 Goa (Panaji) [India], November 20 (ANI): Filmmaker SS Rajamouli's 'RRR' is one of India's biggest blockbusters of 2022. The period drama created waves across the globe, and our Union Minister of Information and Broadcasting Anurag Thakur is really proud of this fact.

Ahead of the grand opening ceremony of the 53rd edition of the International Film Festival of India in Goa, Anurag Thakur, on Sunday, interacted with the media.

From opening up about what the new edition of IFFI has in store for cinephiles to talking about the magic of Indian cinema, the Union Minister talked about different aspects of film industry.

He also recalled his conversation with one of the Australian ministers over 'RRR', which features Ram Charan, Jr NTR, Alia Bhatt and Ajay Devgn.

"I recently met an Australian minister. He told me that he watched 'RRR' a couple of days ago and he really liked it. It feels so good to see how the film is now hailed as an international film. RRR not only did the business but also showed the real abilities of Indian cinema," Anurag Thakur said.

"Regional cinema and others who can't get a platform anywhere else, reach Goa's IFFI. Via this platform, they can reach corners of the world. The festival is also a market for buyers," he added.

Speaking about the 53rd edition of IFFI, the minister informed that people from remote areas have also participated.

"This year lots of premiers are happening here. Several new initiatives are taken. This time, 1000 entries came for the 75 creative Minds. 75 creative minds were chosen from 10 fields. People from remote areas also participated. 75 creative minds is for those who used to feel scared of coming to mumbai, now their requirements are being bridged, opportunities are being provided for all to be able to participate in mainstream film industry. This IFFI platform is not just for mumbai film industry but for people from across the nation to come together and work together. Season premier of OTT platform show will also be happening," Anurag Thakur shared.