How to Watch/Listen: Jets at Patriots 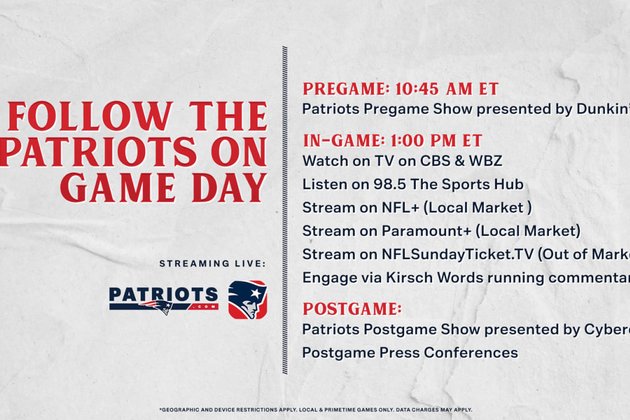 A look at all the ways to watch and listen to this week's regular season game between the New England Patriots and the New York Jets.

This week's game will be broadcast by CBS and can be seen locally on WBZ-TV Channel 4. Kevin Harlan will handle play-by-play duties with Trent Green as the color analyst. Melanie Collins will work from the sidelines. The game will be produced by Ken Mack and directed by Jim Cornell.

Click to see if the game is broadcasting on TV in your area.

Stream the NFL on CBS with Paramount Plus! Subscribers can watch their live local games across devices all season long.

98.5 The Sports Hub is the flagship station for the Patriots Radio Network. A complete listing of the network's 33 stations can be found here. Play-by-play broadcaster Bob Socci will call the action along with former Patriots quarterback Scott Zolak, who will provide color analysis. The games are produced by Marc Cappello.

Sunday's game will be broadcast to a national audience on Sports USA. Larry Kahn will call the game with Dave McGinnis providing analysis.

NOTE: Sirius-XM app has a three months free promo that will allow you to listen to the games this season.

Dunkin' Patriots Pregame Social: Join us on Sunday from 10:45 AM - 12:45 PM on the Patriots.com homepage for the Dunkin' Pregame Social radio broadcast. Host Rob 'Hardy' Poole is joined by Patriots.com's Paul Perillo and Mike Dussault to preview all the action and get the fans take heading into each game. The broadcast is also available on the official Patriots app for iOS and Android.

Patriots Postgame Show presented by Cybereason: Immediately after the game host Rob 'Hardy' Poole from 98.5 The Sports Hub returns with Patriots.com's Paul Perillo and Mike Dussault to break down all the action. You'll hear live press conferences, exclusive player interviews and more. on the Patriots Postgame Show exclusively on Patriots.com Radio and the official Patriots app for iOS and Android.

Kirsch Words In-Game Live Blog: Join us on the homepage of Patriots.com during the game as Patriots Editor-in-Chief Fred Kirsch offers his live commentary on all the action. Plus, get live stats, score updates, highlights and more.

For more ways to watch and stream the game, view our Ways to Watch Guide.