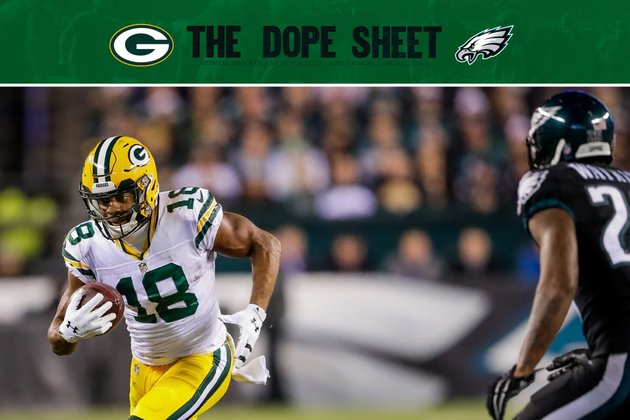 The Green Bay Packers (4-7) travel to Philadelphia to take on the Eagles (9-1) in a prime-time matchup on Sunday night.

The Green Bay Packers (4-7) travel to Philadelphia to take on the Eagles (9-1) in a prime-time matchup on Sunday night.

This is the first time the Packers and Eagles matchup with be on Sunday night.The Packers have won six of the last eight meetings against the Eagles (including playoffs), including the last three contests at Philadelphia (2016, 2010 Playoffs, 2010). Prior to the three wins at the Eagles, Philadelphia had beaten Green Bay nine straight times at home (1974-2006).The Packers won the last matchup, 30-16, at home in 2020.The last time the Packers played at Philadelphia was also a prime-time game, a 27-13 win on Monday Night Football in 2016.Green Bay is 16-4 in prime-time games since 2019, an .800 winning percentage that ranks No. 2 in the NFL over that span (Kansas City, 17-4, .810). Of those 20 contests, 10 have been played on Sunday nights with the Packers going 8-2 with an .800 winning percentage that ranks No. 1 in the NFL among teams that have played on Sunday night more than five times since 2019.In Week 13, Green Bay plays at division foe Chicago, ending a run of five road trips in seven games, and then will have its bye week before coming back to host the Los Angeles Rams on Monday Night Football on December 19.

The game will air across the country on NBC. Play-by-play man Mike Tirico joins analyst Cris Collinsworth with Melissa Stark reporting from the sidelines.

Westwood One Sports will be broadcasting on radio to a national audience with Ryan Radtke (play-by-play) and Mike Golic (analyst) on the call and Scott Graham hosting pregame and halftime shows.All Packers games can be heard on the Packers Radio Network, which is made up of 49 stations in Wisconsin, Michigan, Minnesota, Illinois and South Dakota. This year, the Packers transitioned to a new flagship station in Milwaukee, iHeartRadio Milwaukee's 97.3 The Game WRNW. For a full listing of radio affiliates, go to packers.com/video/radio-network. Wayne Larrivee (play-by-play) and two-time Packers Pro Bowler Larry McCarren (analyst) call the action. McCarren first joined the team's broadcasts in 1995 and enters his 28th season calling Packers games. After originally being paired together in 1999, McCarren and Larrivee enter their 24th season of broadcasts together. They surpassed Jim Irwin and Max McGee for the most regular-season and postseason games broadcast for the Packers with 313 at the 2018 season opener against Chicago.The Packers' radio broadcast is also available on a mobile device through the Packers app or packers.com for anyone that lives in the state of Wisconsin. If you live outside the state, you can stream the game broadcast from a desktop computer through packers.com. It is also available via subscription on Sirius Satellite Radio or NFL Plus (nfl.com/plus).You can also find the Packers radio broadcast on SiriusXM 81 or 226 and on the SXM App under the "NFL Play-by-Play" tab.

THE DOPE ON THIS WEEK'S OPPONENT

In his 14th season in the NFL, having previously served as an offensive coordinator for two seasons (L.A. Rams, 2017; Tennessee, 2018), a quarterbacks coach for six seasons (Washington, 2010-13; Atlanta, 2015-16), and an offensive assistant for two seasons (Houston, 2008-09).With a 13-4 record in 2021, led the Packers to a third straight NFC North crown while also earning the No. 1 seed in the NFC for the second consecutive season.Became the first coach in NFL history to post 13-plus wins in three straight seasons and his 39 wins from 2019-21 passed George Seifert (38) for the most wins by a head coach in his first three seasons in the league (Elias Sports Bureau). His 39 wins are also tied for the second most by a coach over any three-season span in NFL history, trailing only Mike Ditka's 40 wins with the Chicago Bears 1985-87.Guided the Packers to a 22-2 record (.917) in the regular season at Lambeau Field in 2019-21, the top mark in the NFL over that span and the best home winning percentage by a Packers head coach in his first three seasons. His 22 wins at home were also the most in NFL history by a coach in his first three seasons.In 2019, became the first coach in club history to lead the team to the playoffs in his debut season. Also led the largest one-year win improvement in team history (plus-seven).

Led the Eagles to a 9-8 record and a playoff appearance in 2021, becoming the third head coach in franchise history to reach the postseason in their first year as head coach.Under his leadership in 2021, the Eagles ranked No. 1 in the league in both rushing yards (franchise-record 2,715) and rushing touchdowns (25). Philadelphia also registered the second-most defensive TDs (five) in the NFL and ranked No. 10 in total defense (328.8 ypg).Served as the offensive coordinator for Indianapolis for three seasons (2018-20), helping the Colts rank No. 8 in the NFL in scoring (25.9 ppg) and No. 2 in sacks allowed (71) over that span. Also spent five seasons with the Los Angeles/San Diego Chargers (2013-17) and four years with the Kansas City Chiefs (2009-12).

The Packers swept the first nine contests in the series and won 16 of 17 regular-season meetings from 1933-70.En route to winning Super Bowl XLV, Green Bay beat the Eagles in Philadelphia twice, a 27-20 victory in the season opener and a 21-16 win in the NFC Wild Card playoffs.The Packers also defeated the Eagles in Week 2 of the 1996 season, 39-13, as part of a 13-3 season that led to a Super Bowl XXXI title.Green Bay won the last game between the teams at Lincoln Financial Field, a 27-13 win on Monday Night Football in 2016 that was the start of a season-ending six-game winning streak for the Packers as they finished with a 10-6 record en route to an NFC title game berth.The Eagles handed Hall of Fame head coach Vince Lombardi his only postseason defeat in the 1960 NFL Championship, 17-13.