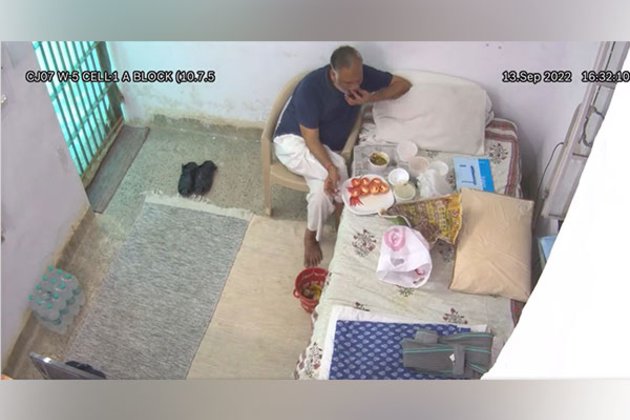 The plea stated that all the national media are regularly running CCTV footage of Satyendar Jain. A parallel media trial is going against him, despite the present matter being examined by this court, argued senior advocate Rahul Mehra who appeared for Jain.

Special Judge Vikas Dhull on Wednesday issued notice to Tihar Jail Authority on an application moved by Satyendar Jain on the CCTV leak. The court will take up the matter tomorrow.

The court was hearing a plea moved by Satyendar Jain and sought direction to provide food as per his religious beliefs during his judicial custody.

Claiming Satyendar Jain has lost 28 kgs in judicial custody, his lawyer submitted that earlier Jain's weight was 103 kgs and now his weight is around 75 kgs.

On this, Special Judge Vikas Dhull stated that as per the application, applicant Satyendar Jain is observing a fast according to his wish and religious beliefs, so losing weight is natural.

Satyendar Jain's lawyer also submitted in court that his client has a protein deficiency.

Advocate Abhijeet Shankar appeared for Tihar Jail and stated that the allegations against Tihar authorities that they have withdrawn some diet and food of Satyendar Jain are without any basis. "We will submit the dietician report and the food is given in 3 days. There is no nutrition deficiency."Abhijeet Shankar submitted that the jail superintendent has been transferred. Many staff members changed. We need to get a report from the Resident medical officer. That is why we need three days.

Yesterday, Satyendar Jain submitted before the trial court that he is not getting privileges in Tihar Jail, and had lost around 28 kgs weight in custody as he was not getting any proper food and medical check-up.

Satyendar Jain's counsel Senior Advocate Rahul Mehra alleged that Enforcement Directorate (ED) is leaking sensitive information to the media despite the order of this court and undertaking given in this court.

"I am defamed every single minute by their act," he added.

Rahul Mehra also denied ED allegations of getting privileged treatment in Tihar Jail and asked what privilege are they talking about.

"I have lost 28 kgs in jail. Is this what a privileged person in jail gets? I'm not even getting proper food. What privilege are they talking about? There is no prison rule violated if an undertrial is pressing his hands and feet?" he argued.

However, appearing for ED, advocate Zohaib Hossain denied the allegations made by Satyendar Jain's lawyer and said that there is no single leak from the enforcement directorate. "We will see that guilty are brought to justice," ED said.

Advocate Zohaib submitted that according to them (Satyendar Jain and his advocates), he was advised physiotherapy so he was taking it. "Many officials of Tihar have been suspended so far. The LG has also initiated an inquiry. Transfers of some top officers also have taken place," Zohaib noted.

Zoheb Hossain further submitted that presuming a leak on our behalf is completely preposterous.

"There has been no leak and there will be no leak. The allegation of leaking information is already in the public domain," Zoheb said.

Advocate Rahul Mehra also submitted that they (agencies) have already put me on the gallows.

"Even Ajmal Kasab got a free and fair trial. I am surely not worse than that. All I seek is a fair and free trial. Please look at the kind of media reports that are running against me and that is in their interest," Mehra submitted to the court.

"It was also informed to the court that multiple agencies are investigating how Tihar Jail was compromised to benefit Satyendar Jain. The footage was also given to the counsel of Jain. The primary source of footage was Tihar Jail," said the ED.

On Saturday, Satyendar Jain moved the special court with an application seeking contempt action against the Enforcement Directorate. (ANI)