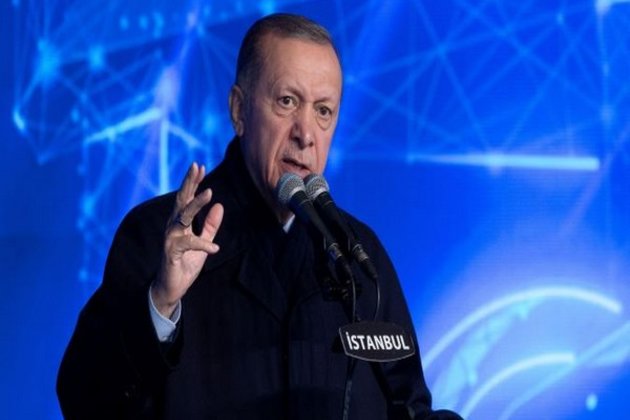 By John SolomouNicosia [Cyprus] January 23 (ANI): Last week Turkish President Recep Tayyip Erdogan signalled that the country's Presidential and Parliamentary elections scheduled for June would be held on May 14.

This immediately stirred a debate about whether he can legitimately run for office, as the Constitution envisages that the President's term of office is five years renewable only once, and Erdogan has been President since 2014. However, the big question is not whether he is entitled to be a candidate for President but, after 20 years in power, there is a real possibility that Erdogan may lose.

Repeated polls show that this time the Turkish elections will be tight and Erdogan faces the possibility of being unseated by the so-called "Table of Six" -a six-party opposition alliance led by the Republican People's Party (CHP).

Erdogan announced his intention to move the elections one month earlier in a speech on January 18 when he said: "Now, we ask for the support of our nation in 2023 by saying, 'Enough! The decision and the future belong to the nation. In the 100th anniversary of our Republic, we have achieved the goals that we wanted our country and our nation to reach, to a great extent... 2023 is both the symbol of our 20 years of work, as well as the beginning of our new vision, the Century of Turkey. This is what makes the upcoming election important and historic."Some constitutional experts express doubts if Erdogan can legitimately contest the elections, in the light of article 110 of the Constitution "that a person may be elected as the President of the Republic for two terms at most."However, Article 116 says "If the Assembly decides to renew the elections during the second term of the President of the Republic, he/she may once again be a candidate."Erdogan became president for the first time in the presidential elections held in 2014. He later took office as the first president of the new executive presidential system in the elections held in June 2018. Under the new system, a person can be elected president at most two times.

Justice Minister Bekir Bozdag on January 19 claimed that there is no obstacle for Erdogan to be a candidate again, saying: "Our President is a candidate running for the second president of the Presidential Government System and it is his second candidacy. There are no constitutional obstacles."But the question of whether Erdogan has the right to contest the elections or not is a moot point, as it is the Parliament and the Election Council that will approve the new election date and as Kemal Kilicdaroglu, the leader of the opposition Republican Party, said that he has no objection if Erdogan stands as a candidate.

What opposition parties are really concerned about is the fact that the election campaign would take place on a highly uneven playing field, given that Erdogan's party has a near monopoly on public broadcasting and the mass media.

Furthermore, Erdogan's Executive Presidency has managed to control the judiciary, the Army, the Police and almost all institutions in Turkey and hollowed democracy in Turkey turning it effectively into a "one man's rule."Berk Esen, an international relations expert at Sabanci University in Istanbul, says: "Erdogan has transformed Turkey's democratic government into a hyper-presidential system, in which parliament is no longer that powerful."This view is shared by the mass media, many scholars, journalists, newspapers and magazines in many countries, which express concern at the great power Erdogan exercises on all institutions in Turkey and his harmful influence on Turkish democracy.

Last week's issue of the British magazine "The Economist" claims that Erdogan as a leader has taken his country "to the brink of disaster," and adds: "Approaching his third decade in power, he sits in a vast palace snapping orders at courtiers too frightened to tell him when he is wrong. His increasingly eccentric beliefs swiftly become public policy... Mr Erdogan's behaviour as the election approaches could push what is today a deeply flawed democracy over the edge into a full-blown dictatorship."Reacting to the article, Turkey's Communications Director Fahrettin Altun harshly accused The Economist of making "cheap propaganda" and disinformation on Turkey and wrote on Twitter: "The Economist recycles its intellectually lazy, dull, and purposefully ignorant depiction of Turkiye (Turkey). It seems like they feel obligated to announce the end of Turkish democracy through regurgitating cliches, misinformation and blatant propaganda."Speaking to reporters following Friday prayers in Istanbul, Erdogan said: "Does a British magazine determine Turkey's fate? It is my nation that decides. Whatever my nation says happens in Turkey."A big currency crisis, mainly created as a result of Erdogan's misguided insistence on lowering the interest rates, high inflation which is currently standing at 65 per cent and high unemployment have eroded popular support for AKP and Erdogan, particularly among workers and the lower classes, who a few years ago were their ardent supporters.

President Erdogan in January raised the salaries of public servants by 30 per cent and restored to some extent their purchasing power, but what about people working in the private sector who find that they cannot buy even the basic things they need? So, discontent keeps rising.

For the first time in 20 years, the opposition parties have a chance to remove Erdogan. Last year six opposition parties - The Republican People's Party (CHP), the right-wing Iyi Party, the Conservative Felicity Party, the Democrat Party (DP), DEVA (Democracy and Progress) Party and the Future (Gelecek) Party- formed a platform called the Table of Six and announced a constitutional package for restoring democracy, the rule of law and a parliamentary system if they win elections in 2023 against President Erdogan.

But they have a chance to win the elections only if they manage to agree and set aside even temporarily the political ambitions of their respective leaders and manage to field a single strong candidate who will be able to convince the Turkish people to vote for him and put an end to the one-man rule of Recep Tayyip Erdogan. (ANI)