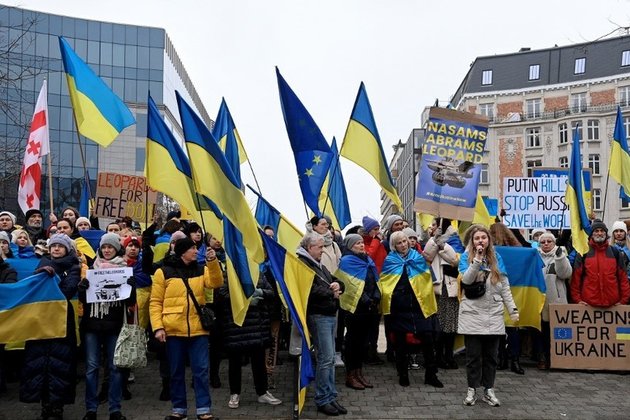 EU foreign ministers approved a fresh tranche of military aid to Ukraine on Monday, Swedish officials have said. The arms bonanza is worth $542 million, but does not include the German tanks that Kiev and its allies have their hopes pinned on.

The bloc's 27 foreign ministers agreed on the €500 million ($542 million) package following discussions in Brussels. Sweden, which holds the rotating presidency of the European Council, announced the agreement on Twitter, stating: "We remain steadfast in our support for the Ukrainian Armed Forces."

Money for the weapons will be drawn from the 'European Peace Facility', a fund that the bloc uses to finance foreign militaries. Ukraine has already received €3.1 billion ($3.36 billion) from this fund, with the aid doled out in seven successive packages since the beginning of Russia's military operation last February.

This supply of arms to Ukraine represented an about-turn from the EU's long-standing policy of not purchasing arms for use in foreign wars. Before last February, the 'Peace Facility' had only been used to supply non-lethal equipment to Georgia, Mali, Moldova, Mozambique, and Ukraine, for a total of less than $125 million.

To date, the US has underwritten most of Ukraine's expenses, allocating more than $110 billion to the country's economy and military since the conflict began and supplying progressively heavier and more powerful armaments. However, Washington refuses to donate its M1 Abrams main battle tanks, leaving Ukrainian officials and their most fervent European supporters - predominantly the Baltic and Eastern European states - to press Germany into filling that role.

Kiev has repeatedly requested that Germany supply its military with Leopard 2 tanks, and allow other European users of the Leopard to donate their fleets. Berlin has not yet made an official decision on sending its own Leopards, but Foreign Minister Annalena Baerbock said on Sunday that her government would not block Poland from sending its stock of the tanks to Ukraine.

Russia has warned that Western arms deliveries will only prolong the conflict, while making Western nations de-facto participants. Should Germany give in and send its tanks, Kremlin spokesman Dmitry Peskov said earlier this week that they "can burn and they will burn like the rest [of the Western weapons]."